Bitter wormwood has been used as a medicine since ancient times, it is distributed over a large territory. Worldwide, it grows throughout Europe, in North America. Place of origin: presumably Europe, North Africa, and Western Asia. In addition to wild growth, wormwood is cultivated for the production of valuable oil. It grows in many places around human settlements and in forests. There are a number of names: “God’s tree”, true wormwood, wormwood, white wormwood. 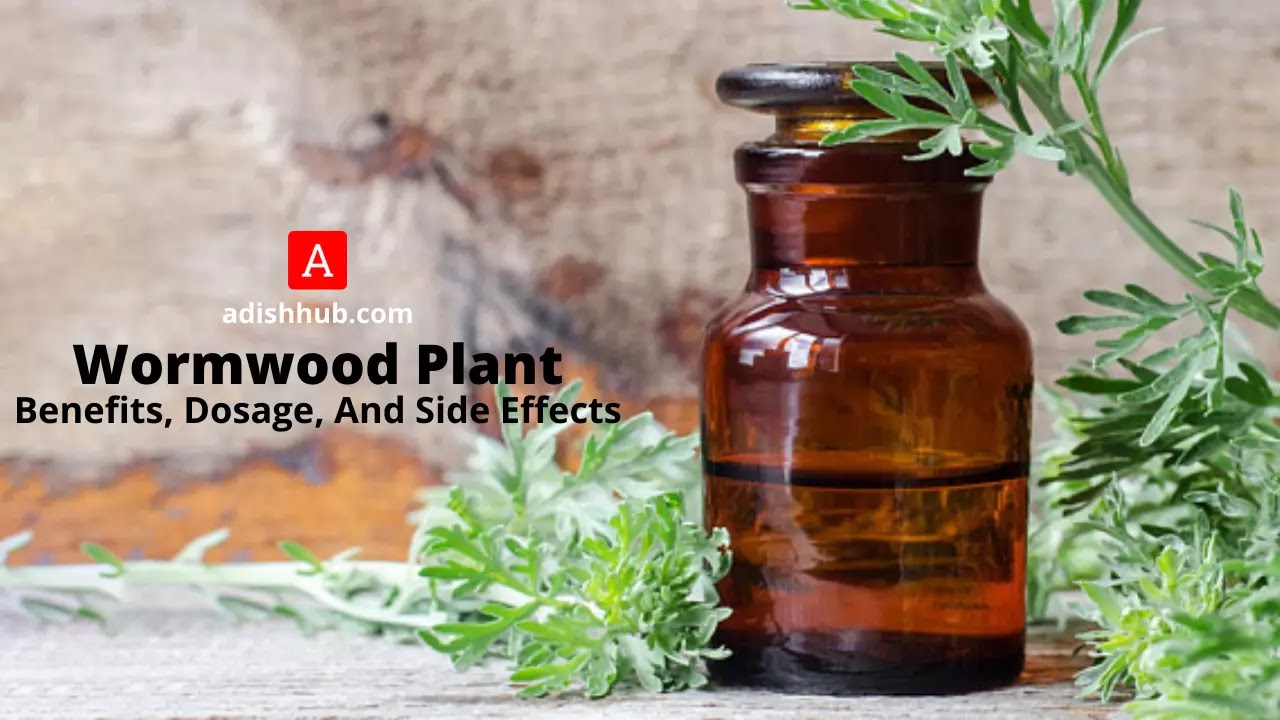 It grows from 50 to 200 cm, often like a shrub, pubescence looks like a silvery felt, erect shoots, taproot, branched. Stems are straight, almost smooth, branching upwards, often short sterile shoots are located at the base.

At the bottom of the plant, leaves with long petioles, dissected two or three times, in the middle of the plant, the leaves have short petioles, cut twice, at the top of the wormwood leaves are almost sessile, pinnate or cut twice, parts of all leaves are pointed. All flowers are of a tubular structure, the color is yellow, the outer ones are pistillate, in the middle are bisexual. Baskets in balls, 2.5–3.5 mm in diameter, are arranged on short branches in one-sided tassels, which create a narrow inflorescence in the form of a panicle.

Baskets are wrapped in a tiled skin, leaves with a wide film. A convex receptacle with hairs prevails. Wormwood blooms in June-July on the European territory of Russia. The fruits grow in the form of sharp brownish seeds, about 1 mm long, oblong shape, similar to wedges, with thin grooves, there is a rounded, slightly convex platform at the top. Fruit ripening occurs in August – September. Reproduction occurs by seeds, wormwood tolerates frost and dry weather well.

The part of the wormwood growing above the ground at the time of flowering, and the leaves before flowering, contains sesquiterpene lactones, bitter glycosides (artabsin, absintin, anabsintin), which creates the bitter taste of wormwood.

Wormwood contains essential oil: it is a thick liquid, blue or dark green color, has a strong bitter taste. The oil is isolated from the plant by steam distillation, the product contains:

The healing properties of wormwood

Traditionally, wormwood has always had pharmaceutical and botanical importance and has been used to treat a number of conditions, including hepatocyte enlargement, hepatitis, gastritis, jaundice, wound healing, splenomegaly, dyspepsia, indigestion, flatulence, stomach pain, anemia, and anorexia.

Due to irritation of the nerve endings of the taste buds in the oral cavity, the active components of wormwood stimulate the glands of the gastrointestinal tract (the production of bile and pancreatic juice increases). The essential oil of wormwood acts on the central nervous system like camphor. Hamazulen activates the immune and excretory functions, which explains the laxative and anti-inflammatory effect of the plant.

Long-term use of wormwood essential oil can cause toxic and mental disorders in people with clinical manifestations, including seizures, insomnia, and hallucinations. During pregnancy, it is forbidden to use wormwood, also in acute stages of intestinal inflammation with bleeding, medicines containing wormwood become dangerous. The use of wormwood for asthma, allergies of any kind, gastritis and stomach ulcers is also contraindicated.

The use of wormwood

Bitter wormwood is used in the treatment of diseases, in cosmetology, cooking, dietology. The properties of wormwood are also being studied by the scientific community, numerous studies are being carried out.

What exactly is used and in what form

For growing wormwood, the conditions of dim light, the shady side of the soil are more suitable. The plant propagates easily by dividing the roots in the fall, cuttings or seeds sown shortly after they ripen. No further maintenance is required other than getting rid of the weeds. Wormwood is planted at a distance of about 60 cm from each other.

The leaves and tops of the plant are harvested in July and August, when the wormwood is in bloom and dried. The main component is a volatile oil, the yield of which during distillation is from 0.5 to 1.0 percent. It is usually dark green and sometimes blue in color, has a strong odor and a bitter, pungent taste.

Flowers, dried and powdered, are most effective as an anthelmintic and were previously considered excellent for fevers. The herb essential oil is used as a remedy for worms.

Leaves and flowering leafy tops are used for medicinal purposes. Harvesting takes place in two stages: the leaves near the roots are cut off without petioles until the plant has bloomed, at the time of budding. The tops are torn off 20–25 cm long from the apex; if you miss the terms, the medicinal properties of wormwood are significantly reduced. If harvested later, the flowers turn brown and lose their yellow color.

To avoid the darkening of raw materials, wormwood is placed in baskets and dried in a shady place: in attics, under awnings, outdoors, or in special dryers at 40-50 degrees Celsius. In this case, it is necessary to spread out in a layer of about 3-5 cm and periodically turn over. The dried stems should be brittle. To keep the raw materials in the desired condition, wormwood is placed in fabric bags made of natural materials or in wooden containers, the shelf life is two years.

Official medicine also investigates the properties of wormwood. Many positive qualities of this herb have been scientifically proven. Many properties and applications are yet to be learned by the scientific community. This definitely takes time and tests on real examples (1, 2). Increasingly successful indicators in the treatment of cancer with alternative methods using plants are directing the scientific world towards natural plant resources. The antitumor properties of wormwood extract have been investigated on human colon cancer cells, endometrium, and embryonic kidney cancer cells.

As a result of the study, it was found that wormwood extract exhibits antioxidant properties, the most effective components of which are chlorogenic, quinic, cinnamic acids, royfolin, and malic acid. Wormwood extract showed inhibitory activity against DLD-1 and ECC-1 cancer cells, while the inhibitory effect against HEK-293 cells was found to be low. Thus, it was found that the components of the extract increase the intracellular amount of free radicals on cancer cells, which in turn leads to DNA damage and, consequently, to the death of cancer cells.

Bitter wormwood has always been very widely used in folk medicine in many countries. In ancient times, during the Olympic Games, athletes used a drink made from wormwood to relieve tension in muscles and nerves. Nowadays, healers successfully use wormwood in their medicinal potions and decoctions.

To facilitate the fight against alcohol addiction, a decoction of wormwood with oregano is used:

Wormwood tea, made from 28 grams of herb, infused for 10-12 minutes in 0.5 liters of boiling water and taken in glass doses, will relieve melancholy and help get rid of the yellow tint on the skin during hepatitis. It will also be a good gastric remedy, and with the addition of a fixed alkaline salt obtained from the burnt plant, it is a powerful diuretic in some cases. Ash produces a cleaner alkaline salt than most other vegetables.

The sap of the larger leaves, which grows from the root before the stem emerges, has been used as a remedy for jaundice and dropsy, but it causes severe nausea when not properly dosed. A light infusion of the tops of the plant, used fresh, is great for all stomach upsets, creating appetite, aiding digestion and preventing post-meal nausea, but it has the opposite effect in overdose.

Avicenna himself also healed ailments using bitter wormwood. A well-known doctor treated inflammation of the eyes with a decoction of wormwood, also expelled helminths with the help of a plant, and prescribed it to women to normalize the cycle. Avicenna used fresh juice to treat jaundice and dropsy. In Central Asia, an infusion of wormwood flowers is used in the fight against hemorrhoids, irritation of the cecum, epilepsy, ulcerative colitis and halitosis. In India, wormwood is used as an anthelmintic and general tonic.

Nature gives us many ways to restore our health. Almost every herb in the right dosage and with the right method of preparation can help in the treatment of certain ailments. Nevertheless, one should not forget about awareness in one’s life, and the main thing is to thank Mother Nature for her care for us.

Be healthy and healthy!