The use of nettle has been known for several thousand years: even in the works of Hippocrates, Dioscorides and Galen, the healing properties and use for medical, cosmetic and nutritional purposes were mentioned. It is a versatile herb for promoting health, maintaining tone and improving mood. The herb is also used to nourish and enrich the body not only with vitamins, but also proteins and carbohydrates. Nettle has found application in medicine, cooking and cosmetology.

There are contraindications, specialist advice is needed

So what is the use of this herb? The infusion of this burning plant improves the functioning of the gastrointestinal tract, has a choleretic effect. Due to the large amount of vegetable protein, lectin, the herb has a strong anti-toxic effect, and the chlorophyll in its composition helps in healing wounds and strengthening the hair structure. 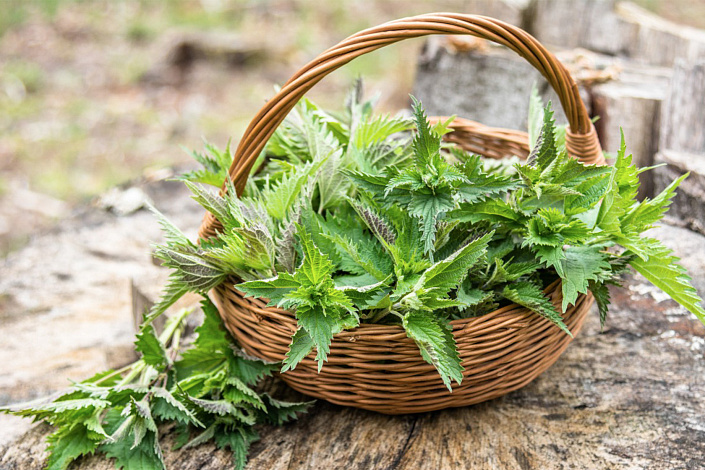 If you put the question “what is the use of nettle for humans?”, Then the first place will be the answer – the chemical composition, because it contains a huge amount of trace elements. 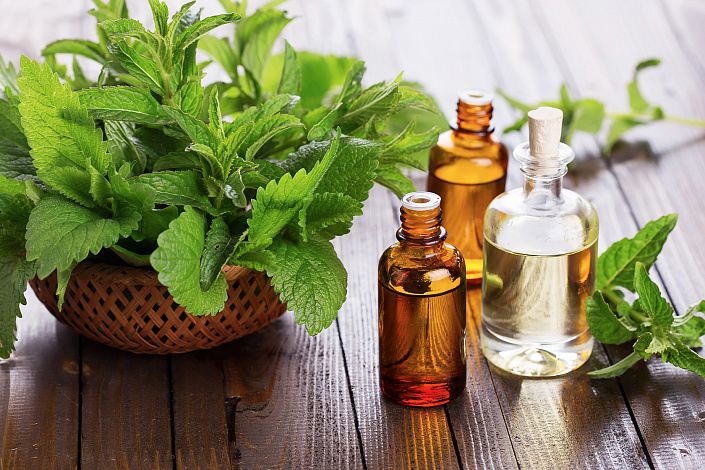 What are the vitamins in nettle?

Since this herb is a multivitamin plant, its leaves have twice as much ascorbic acid than black currant, lemon or apple, and the carotene value is higher than in carrots. The plant contains vitamins A, C, group B (B1, B2, B3), E and K, macro- and microelements. The presence of vitamin K is responsible for the hemostatic action of the stinging herb. In what form is it used?

The benefits of nettle for humans have long been known, therefore it is often used in the treatment of boils, acne, and also as a remedy for rheumatism and gout. To do this, it is recommended to use it in the form:

This herb grows everywhere in the north-west and in central Russia, so it will not be difficult for many residents of the country to collect it on their own. Therefore, in times of famine, the healing properties of dioecious nettle saved many people from vitamin deficiency. The main thing is to choose, collect or buy a plant from ecologically clean regions of Russia.

Important information! If you decide to collect the grass with your own hands, then know: it is best to use the leaves for treatment, which are collected from May to June. The collection must be dried in a uniform layer up to 5 cm thick.

You can use modern dryers in which it is necessary to set the temperature up to 50 °. The shelf life of such a blank is two years. You can also dry out the roots that have beneficial properties. The roots are harvested and harvested from late autumn to the first days of spring, the flowers of the plant – in the summer, and the seeds – from late summer to early autumn. To make juice from nettles, only young shoots and stems are needed before inflorescences form.

It has been known as a medicine since the 17th century, its benefits have been proven by modern medical research, therefore it is actively used:

Among the medicinal properties are increased blood clotting and hemoglobin, stimulation of erythropoiesis and an increase in the number of platelets in the blood. The herb increases the level of prothrombin with excessive administration of anticoagulants and produces a vasoconstrictor effect. Nettle-based drugs sold in the pharmacy have choleretic, anthelmintic, diuretic, anti-inflammatory, expectorant effects. They are also used in diabetes mellitus.

For women, this plant can bring both benefits and harm, therefore, the fair sex should be careful. If it helps nursing mothers in improving milk flow for the baby, then it can be dangerous for pregnant women, as it greatly increases the tone of the muscles of the uterus and can lead to miscarriage.

But during childbirth, it can help women in labor with blood clotting disorders and blood loss, promote a quick and painless uterine contraction after childbirth. Therefore, the question “is nettle good for pregnant women?” while still open, be sure to consult a physician prior to use.

In general, the plant is widely used for an analgesic effect and as a hemostatic agent, therefore it will be effective for various gynecological ailments: uterine bleeding and for normalizing monthly cycles. 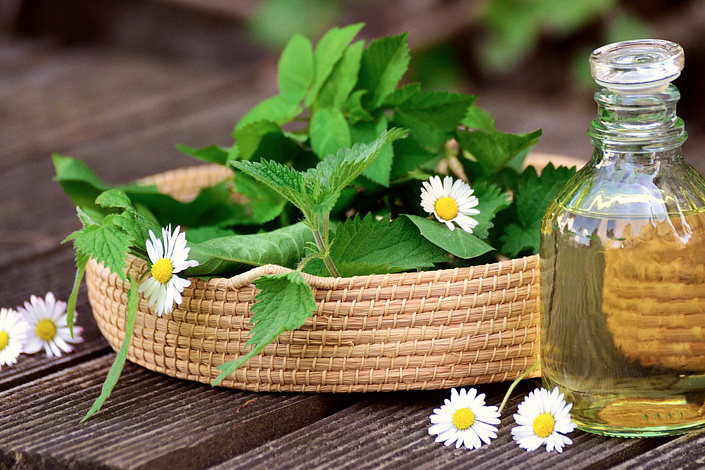 Why nettle is useful for men: to strengthen potency. The herb has a beneficial effect on the reproductive system and helps in the treatment of prostate adenoma. The herb is used as a fortifying and prophylactic agent; you can use all the components of the plant – seeds, roots, leaves. Traditionally, the duration of the course of treatment is four weeks. Also, grass can be supplemented with the main course of treatment with medications, but this is allowed only in agreement with the doctor. Independent actions can lead to adverse effects on the part of other body systems.

The seeds can help women with infertility and men with impotence. For this, nettle seeds must be mixed with softened banana and eaten every day. Freshly squeezed juice from the leaves is recommended for the treatment of osteomyelitis and for problems with food digestion, as well as with a large amount of salts in the joints. The leaves are brewed and used to strengthen the immune system during colds and flu.

It is useful for poor appetite, gastritis, enterocolitis, pathology of the cardiovascular system, in particular with heart failure of I and II degrees, tachycardia. Plus, it helps restore the sense of smell when it is lost or desensitized. Sun-dried leaf powder is used to treat ulcers and ulcers.

Why is nettle infusion useful?

A strong infusion of leaves is an excellent remedy for ulcers, burns and small wounds. It is actively used to strengthen hair when it is dry and brittle, as well as to treat dandruff. Cooking recipe: fill the chopped herb with warm water, be sure to leave some room for fermentation. Cover the container with a lid, plank or wrap with burlap and place in a warm place for 7-14 days.

Why is nettle decoction useful?

Taking a decoction a few days before the start of the menstrual cycle helps to reduce the volume of blood loss in women. The decoction is also useful for patients with diabetes mellitus, but for a healing effect you need to know how to brew fresh herb correctly. We propose the following option. Cooking recipe: mix 2 tbsp. tablespoons of dried nettle and mint leaves, add 3 liters of water and cook for 3 minutes. Insist for about half an hour and filter. You can add honey to the broth.

In cooking and dietetics

In cooking, nettle leaves, seeds and roots are popular in salads and first courses (pickles, borscht), they are also added to sauces, fillings for pies, plus they are salted and fermented for the winter. To reduce the pungency, the leaves are treated with boiling water. Young, delicate inflorescences are added to tea and dried for the winter. In hot dishes, add a couple of minutes before cooking, in cold ones, first rinse, put in boiling water and cook for two minutes, rinse with cold water, and only then you can cut – then you will not burn yourself. Often adding recipes with nettle to the menu, you can reduce weight, because in 100 grams of this herb there are only 24.8 calories.

Important information! If there are often and a lot of untreated leaves, then flatulence will occur. 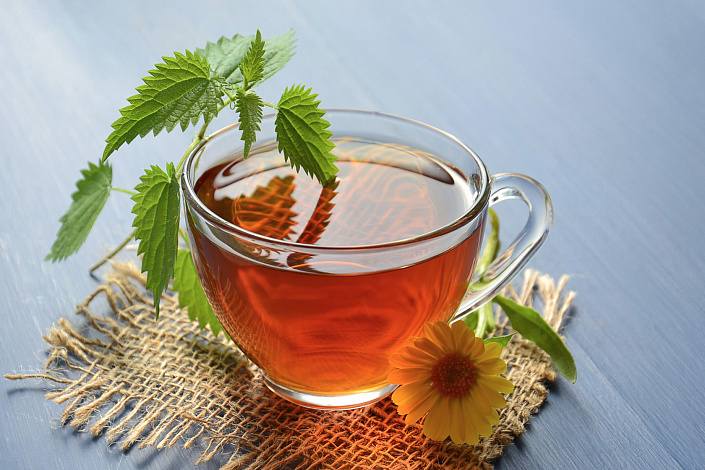 For a simple and vitamin-rich tea recipe, take:

Pour one tablespoon of each ingredient into a container for two cups of hot water. Let the ready-made product stand for two hours, after which it can be consumed like regular tea. Another advantage of this tea is that there is no need to waste time preparing a decoction.

It is not recommended for people diagnosed with varicose veins or thrombophlebitis, as this plant strongly thickens the blood. In no case should it be used by pregnant women, as it can cause contractions and premature birth.

For hair growth and scalp care

In cosmetology, it is widely known as the best helper in hair loss. The author of the medieval medico-pharmacological treatise in verse in Latin “On the powers of herbs” mentioned it as an effective means for the growth and strengthening of hair. There are many cosmetic recipes using a decoction of nettle, modern manufacturers make products based on this burning plant, but we still offer recipes so that you can independently make home cosmetic procedures for the health and beauty of your hair.