Viburnum is a shrub with red berries and white inflorescences that are popular in folk and traditional medicine. The secret of the demand for berries is in the presence of vitamins, minerals and antioxidants necessary for a healthy lifestyle.

The beneficial properties of viburnum have been carefully studied at the world level; studies have shown that the constant use of this berry reduces the risk of cardiovascular diseases, problems with the gastrointestinal tract and other diseases. Viburnum berries prevent the occurrence of cancers and fight possible complications when carrying babies. 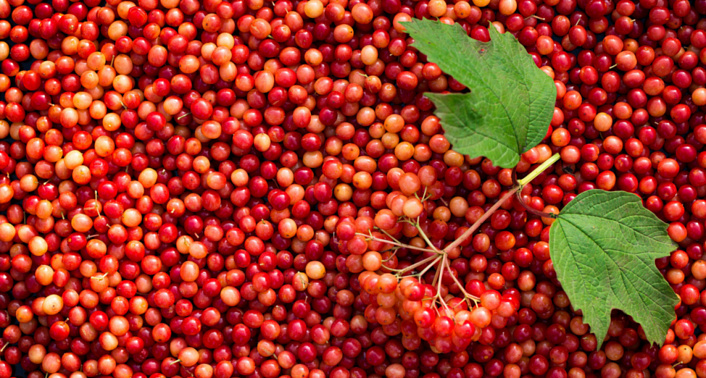 There are contraindications, a specialist consultation is required

There are six scientifically proven facts about the benefits of viburnum.

In 100 grams of the product, there are only 26 calories – this is a very low indicator, which means that it is impossible to increase weight with viburnum berries. They contain essential vitamins A, B5, B9, C, and they also contain a lot of vitamin K: 98 percent of the daily dose. Plus they contain a lot of calcium, magnesium, phosphorus, potassium, zinc, iron and manganese.

In addition, medicinal viburnum is rich in polyphenolic compounds, which are known for their antioxidant activity, so the berries are advised to be used for the prevention of most chronic heart and vascular diseases. The specific sour taste of viburnum juice is due to the presence of formic, oleic and acetic acids in the composition. The seeds of the berries themselves, often called seeds, are rich in fatty oils, which also have a slightly bitter aftertaste. 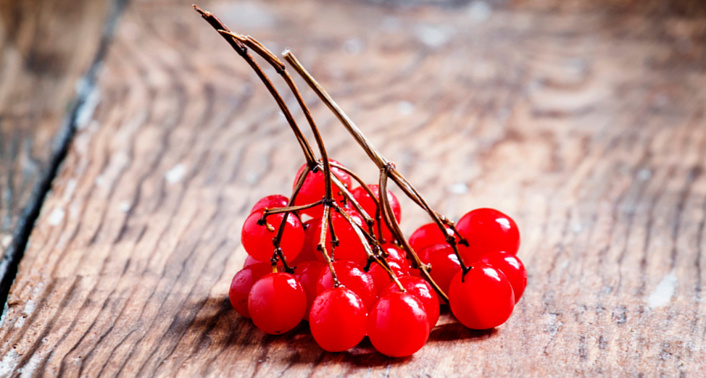 The healing properties of viburnum

Healers and healers have known the beneficial properties of red viburnum for a long time. Their recipes for tinctures and compresses have come down to us thanks to numerous medical books of antiquity. So, for example, the bark of this shrub was soaked and insisted to create medicines that had healing powers for diseases of the liver and kidneys, complaints about the gastrointestinal tract, with suffocation, and were also used as an antispasmodic agent.

Broths were considered a natural antibiotic that can have anti-inflammatory and antipyretic effects. This is a truly proven folk remedy in the fight against colds and infectious diseases. It helps with chest coughs, hoarseness, high body temperature.

Indeed, this berry has various beneficial properties, including:

Berries are used to treat edema, hypertensive pathologies, neuroses, anacid gastritis, as well as respiratory and skin diseases. Dermatologists and cosmetologists use freshly squeezed juice against acne, pimples, pigmentation on the face, for the treatment of wounds and eczema. In traditional medicine, fruits are widely used as a tonic, health-improving agent. Berries have shown themselves well in the fight against skin flaws – boils, abscesses, eczema.

Compresses of juice should be put on problem areas for 1-2 hours. After two weeks, it is important to take a break for seven days, then repeat the procedure. For a successful and sustained result, it may take from two to four courses. With eczema, drinking half a liter of pure juice daily also helps. It is not for nothing that preparations with viburnum extract are prescribed to patients all over the world.

Since the berries remain fresh for a long time, if they are frozen, the people are stocked up with them in advance. Thanks to freezing, the bitterness of the berries decreases, but the benefits remain. Also in folk medicine they are consumed dried, which contributes to the contraction of the muscles of the heart, an increase in urine output. The benefits of tincture of viburnum flowers are also widely known; it is used internally as an antipyretic. It is recommended for men as an active aid in the painless functioning of the reproductive and excretory systems. 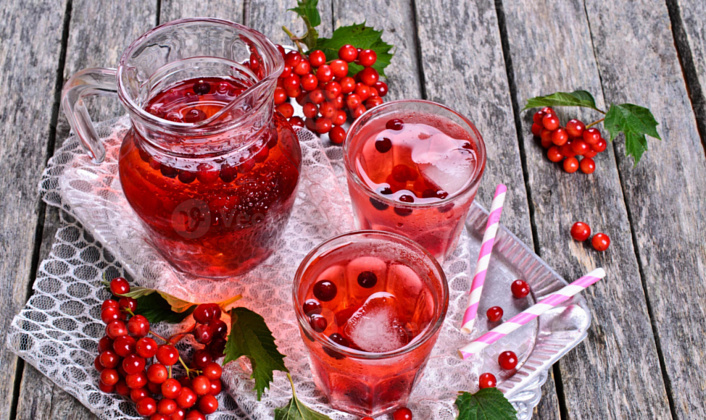 In the medicine of eastern countries, in particular Chinese, they use not only berries, but also bush leaves for laxative and emetic effects. In addition, many doctors in the East prescribe fruits and juice to people with cancer who are undergoing chemotherapy. Their regular use opens the pores, thereby facilitating the elimination of toxins and toxins, which improves blood flow.

In the East, red viburnum is added to many cosmetics, especially often it is included in shampoos, masks and face lotions. After all, the berry has an antiseptic, drying effect, so at home owners of oily, problem skin can wipe their face with viburnum juice. 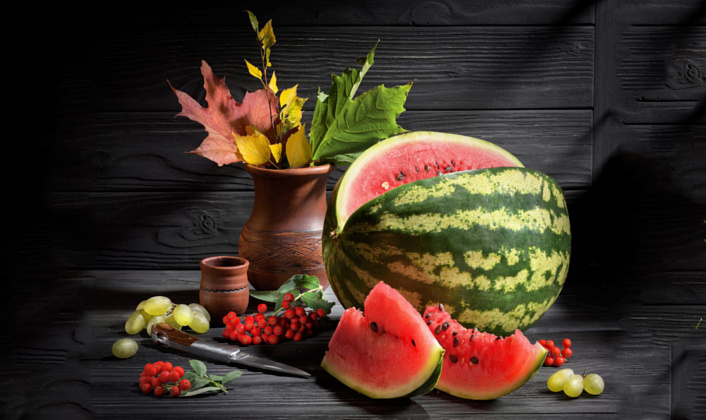 Scientific research on the benefits of viburnum

The medicinal properties of red viburnum have been comprehensively studied. Here is just a small list of works:

The use of viburnum berries in dietetics

The medicinal benefits and harms of viburnum have been studied by foreign nutritionists, who consider it one of the best solutions for cleansing and toning the body. Kalina is advised to be used for fasting days: for this, viburnum juice is added to clean still water and honey is added. In addition, diets have been developed on its basis.

During the day, you need to consume 2 kg of watermelons and 200 g of fresh viburnum berries. You can drink freshly squeezed watermelon juice, it is allowed to divide the total amount into 5-6 doses. This is very effective because watermelon juice contains the antioxidant lycopene, which makes watermelon an important part of this diet for obesity.

Kalina diet for cleansing and recovery

It is recommended to adhere to the following diet for three days and evaluate all the dietary properties of viburnum:

Since viburnum is distinguished by a high content of vitamins and nutrients, this diet perfectly tones the body and starts all life processes.

The use of viburnum in cooking

How many tasty, healthy, and sometimes vital things can be prepared from its berries. For the first acquaintance with the healing properties of viburnum, it is worth starting to use it fresh, as a slightly sour dessert for tea, or add it to porridge. By the way, it can be enjoyed all year round, just buy it or harvest it and put it in the freezer. You can also dry it or dry it, squeeze out juice, make jam, jam, marshmallow out of it.

The aroma is magical, it has been in the air for more than one day, it seems to many that it is the smell of apples and valerian grass. In nature, there are various varieties of viburnum, the fruits have a wide variety of shades – from bright burgundy to dark purple. Here are some proven recipes for everyday use or for storage throughout the year in large volumes:

Berries are also used in baking: the famous “Kalinniki” – pies, pies and flat cakes stuffed with viburnum fruits. People leading a healthy lifestyle will appreciate viburnum tea, widely known for its strengthening effect, especially in the autumn-winter period, when colds are aggravated. Make one cake, roll or sweet envelopes from this healthy and tasty berry, and you will definitely become its ardent fan. After all, its benefits have been known for a long time, and daily warm tea with viburnum was the best medicine for colds.

Viburnum dishes and drinks are very popular in the autumn-winter season, when they are used to strengthen the immune system or for treatment. This berry has a very rich taste and characteristic smell that cannot be confused with anything else. Try it! 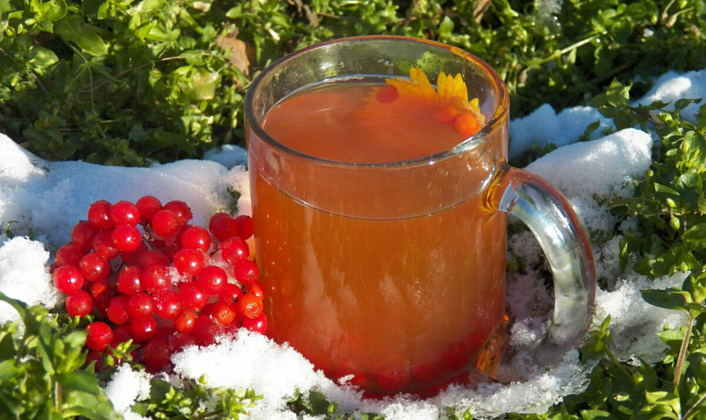 Dangerous properties of viburnum and contraindications

Despite the benefits, there are certain dangerous properties of these berries. In particular, viburnum has contraindications, because the components of the plant may not be suitable for everyone.

Before using berries as a remedy, you need to be careful for people with the following diseases:

Also, significant harm to viburnum can be felt by pregnant women, since the berries contain many components that are identical to female hormones. Their increase in the female bloodstream can adversely affect the developing fetus. In severe cases, the composition of viburnum can lead to miscarriage.

How to choose viburnum berries

Modern gardeners are divided into two camps: some believe that it is necessary to pick berries immediately after they have become red, without greenery and unnatural specks, while the latter are guided by the time of collection – after the first frost. Then bitterness disappears, sweetness appears with a slight tart note and a drop of bitterness.

When buying or picking, we recommend that you look at the color of the berries: they should have a brightly saturated red hue, no pink reflections. Breathe in the aroma of the berry, it should be sour and sweet, with a slightly tart aroma. You need to collect or buy after frost, when it loses its bitterness. Plus, berries harvested after frost accumulate more useful micro and macro elements than during harvest before the temperature outside drops.

How to store Viburnum

Someone thinks that for long-term storage of berries they must be cut off from the brushes. However, this is the wrong approach, the twigs can be stored in their entirety. It is necessary to store viburnum in loosely closed containers. You can also dry the berries by simply hanging them in the kitchen. At the same time, the benefits of viburnum are not lost, and the decorative effect in the room is enhanced.

The product will not deteriorate and will not lose its beneficial properties, even after several months it retains trace elements in proper form. When you cannot store berries in low temperature conditions, it is best to cook them. In particular, make jam, compote according to the recipes above. Viburnum berries easily tolerate even critical frosts, because in nature they winter outdoors, which means they can be stored in the freezer for a long time.