Chlorophyll is a special pigment that colors plant chloroplasts green. Thanks to him, the well-known photosynthesis takes place, which is rightfully a real miracle of nature. With its help, carbon dioxide is converted into chemical bonds of carbohydrates, and oxygen is released – every student knows this. From the article you will learn: why a person needs chlorophyll, what determines its ability to accelerate tissue regeneration, a positive effect on the cardiovascular, respiratory, urinary, and digestive systems. 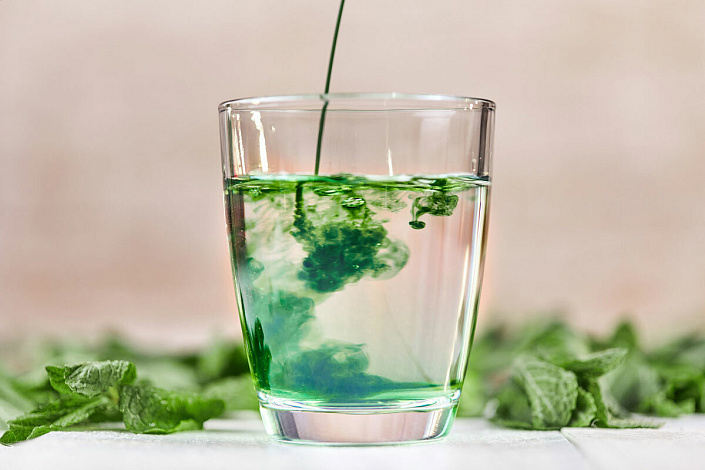 It plays an active role in the formation of immunity, as it can create tight molecular bonds with certain substances, neutralizing them. These substances – procarcinogens – promote oxidative breakdown and lead to malignant tumors or liver disease.

The main reason for the beneficial properties of chlorophyll lies in its antioxidant and anti-cancer effects.

What is Liquid Chlorophyll?

It is called the green elixir of beauty! It is believed that only one drop per day, and no doctor is required – this is how world nutritionists usually describe its action.

What liquid chlorophyll is used for:

In addition, it cleans the blood, if there is a reduced number of red blood cells in the bloodstream, then chlorophyll will help change this problem for the better. New erythrocytes, due to hemoglobin, distribute oxygen to all cells of the body, which has a positive effect on the general condition.

Another unobvious plus of the drug is that it is a natural internal deodorizer for the body: after a couple of weeks of use, sweating is minimized, unpleasant odors disappear.

A published article on the PubMed portal by Montelius C., Erlandsson D., Vitij E., Stenblom E.L., Egecioglu E., Erlanson-Albertsson K. describes in detail how the daily use of supplements with membranes from green plants for three months affects weight loss in overweight women.

The foreign portal WebMD published an article on the benefits of chlorophyll for human skin and its role in getting rid of an unpleasant odor.

Under the leadership of Johan de Vogel, Denise Jonker-Termont, Esther M.M. van Leeshout conducted a study on “Green vegetables, red meat and colon cancer: chlorophyll eliminates the cytotoxic and hyperproliferative effects of heme in the colon of rats.”

The work of a scientist from the Department of Biochemistry, Pai-Chai University, Daejeon, Korea Ch.Yun on nonspecific inhibition of cytochrome P450 activity by chlorophyll in human and rat liver microsomes has been published.

The medical research website PubMed published an article on the topic “Adding thylakoids to foods high in carbohydrates reduces hunger, increases CCK levels, prevents postprandial hypoglycemia in overweight women”, authored by a specialist in the Department of Experimental Medicine and the Department of Appetite Regulation at the Faculty of Medicine, Lund University in Sweden.

It turns out that the benefits of chlorophyll for humans are irreplaceable. If you consume more foods with its maximum content, then you can not only strengthen and maintain health. Chlorophyll can be selected from two main sources: natural options and dietary supplements developed from them.

Natural sources of chlorophyll are all types of greens, root leaves, green vegetables themselves, and algae (in particular, raw materials after processing kelp algae).

Dietary supplements from chlorophyll can also make up for a lack of chlorophyll in the diet. They are available in both encapsulated and liquid form. To do this, manufacturers squeeze fresh juice from plant leaves, create ready-made solutions from it immediately, or this liquid is dried and packaged in capsules. The liquid form contributes to a more effective healing effect of chlorophyll on the human body.

The benefits of chlorophyll for the body

Maximilian Oskar Bircher-Benner (a Swiss physician who practiced in the 19th and 20th centuries) wrote in his writings that the sun’s rays accumulating in leaves and grasses are of unprecedented importance.

All green stems, fruits, and vegetables contain concentrated chloroplasts in their composition and should always be in the diet, since the chlorophyll contained in them has a comprehensive effect on the human body.

Bircher-Benner was the first to answer the question “how is chlorophyll useful?” and campaigned for a competent and healthy diet. If a person has at least one of the following symptoms, then a deficiency of this substance in the body is possible:

For any of these signs, you need to think about starting to take chlorophyll in liquid or capsule form. Prompt response to symptoms can greatly speed up the healing process.

Benefits of chlorophyll for blood

It perfectly helps with anemia, triggers the activation of hematopoiesis. After all, chlorophyll stimulates the bone marrow, therefore, the production of red blood cells – red blood cells, the most numerous blood cells – increases. It also cleans the blood from toxins and excess pharmaceuticals. Plus, it activates the action of enzymes involved in the synthesis of vitamin K, which is necessary for natural blood clotting, so you need to know how to drink liquid chlorophyll correctly with nose and heavy menstrual bleeding.

The recommended intake of chlorophyll: 1 tsp, diluted in a glass of clean drinking water, 1-3 times a day 15-20 minutes before meals. For colds, you can increase the dose 2-3 times.

Advice for effective use: to enhance the result, it is advisable that the water is slightly warm (but not hot!). Medical advice is required before use.

One of the medicinal properties of chlorophyll is to strengthen the immune system. It effectively stimulates phagocytosis and enhances the body’s immune function. Plus, it increases overall resistance to various diseases, helps fight viruses, reduces the likelihood of rapid fatigue, and relieves frequent colds and herpes. Also contained in green leaves, a substance helps the growth and development of strong bones, since magnesium is the central atom of the chlorophyll molecule. Like vitamin D, this mineral is responsible for muscle relaxation-contraction – thus it tones up the tissues. Helps in the treatment of recurrent pancreatitis, maintaining the function of the pancreas.

Note! A regular diet high in red meat and low in green vegetables significantly increases the risk of colon cancer. Therefore, if you often eat meat products, be sure to include more fresh vegetables, fruits and herbs in your menu.

The antibacterial effect of chlorophyll

Due to its strong antibacterial effect, it is used against skin inflammation and acne; chlorophyll also dries out pimples, acne and other rashes, plus it suppresses the development of fungi. The benefits of chlorophyll in cosmetics:

Therefore, it is often used as a component in the production of cosmetic soaps to enhance its bactericidal, antibacterial, deodorant properties, in care products to get rid of sweat odor, in dental accessories as a bactericidal ingredient and as a constituent for taking a bath to add aroma, and also for a relaxing, calming effect.

Chlorophyll for the digestive system

It perfectly accelerates the detoxification of the body by eliminating waste, regulating fluid levels, which helps to relieve constipation. Thanks to this special action, chlorophyll is very useful for overweight people, as it helps to speed up the metabolism. Also, the use of foods rich in green enzymes helps to easily adjust the acid-base balance in the body, which, in turn, prevents the development of pathogenic microorganisms in the body.

For good work of the digestive tract, you can drink cocktails of green vegetables and herbs, which nutritionists advise to include in the diet at least 3-4 times a day, 170 ml.

Here are some recipes for such healthy drinks:

Green smoothie: Take one banana, a bunch of fresh salad, 100 g of water, beat with a blender. They can have a hearty breakfast. It’s delicious and nutritious!

Refreshing cocktail: You will need a bunch of mint and lettuce, cut a pear, pour 200 g of pure water. Whisk with a blender. Serve in glasses.

Summer drink: Take one ripe tomato and cucumber, add parsley leaves. Whisk with a blender. If it’s thick, you can add a little water.

Sweet drink: Take one banana and a couple of juicy plums, add a bunch of green basil and 200 g of water. Whisk everything with a blender, serve in dessert glasses.

“Liquid” salad: Whisk the parsley, dill, sauerkraut juice, one tomato in a blender, then add a teaspoon of sugar and 100 ml of water. It tastes like a salad for lunch or dinner, but it is easier and faster to use it in such a liquid form.

Nettle moisture: Take a bunch of nettles, parsley and one banana, beat with a blender, add a mug of water. The real power of vitamins in one glass!

It is known that bad breath is a symptom of cardinal digestive disorders. In this regard, there is a triple benefit of chlorophyll for humans:

It is also actively prescribed to patients with a disappointing diagnosis of trimethylaminuria, the main symptom of which is the smell of rotten fish “emanating” from the body.

Another of the beneficial properties of chlorophyll is its effect on women’s health. Its use relieves the condition of women with iron deficiency anemia caused by uterine bleeding or heavy menstruation.

Chlorophyll is necessary for women for the rapid natural restoration of hormonal balance, as it promotes the production of the female hormone – estrogen. In particular, nutritionists even recommend it to pregnant and lactating women. But the dose for them is determined individually, strictly under the supervision of a doctor, so expectant mothers, before deciding how to take chlorophyll, should definitely consult their gynecologist.

Contraindications and side effects

Since this substance is found naturally in almost all plants on Earth, therefore, it is non-toxic and absolutely safe. But at the same time, there are still side effects of chlorophyll, such as discoloration of stools, itching or burning when applied topically. They are explained by excessive consumption of it in food. Contraindications:

In conclusion, we want to say that the benefits of chlorophyll are priceless. This is especially true of its ability to have a beneficial effect on the formation of red blood cells and an increase in hemoglobin in the blood, as well as pigment derivatives are used for the prevention of cancer. The use of chlorophyll helps to improve everyday life, cleanse the skin of the face, reduce stress and fatigue (removes the lack of magnesium, which causes stress, irritability, sleep disturbance, fatigue), you can quickly and easily recharge the natural energy of nature!