Beetroot: Today it is already becoming obvious to many that modern medicine is powerless in the face of many human diseases. And trust in official medicine is getting less and less every year. What are oculists with glasses, overweight nutritionists, and the fact that psychiatrists often differ from their patients only by the presence of a white coat, are already making up jokes. Who can be cured by a person who could not cure even himself?

Therefore, all that remains for a person is to accept the fact that his health is only in his hands. And such a position is much more constructive than shifting responsibility for one’s life and health onto medicine.

Pharmacology also does not inspire confidence. Most medications simply eliminate the symptoms, thereby exacerbating the disease itself. And the only medicines can be considered only what nature has given us. As they said in ancient times:

“Make food your medicine if you don’t want medicine to be your food.”

Vegetables are among the many varieties of natural medicines. Their coarse fiber is not assimilated by our body, but it can perform the function of cleansing the gastrointestinal tract, and juices from vegetables can trigger deeper cleansing processes. One example of such natural medicines is beets.

Beetroot is not only a medicine, but also an indicator that allows you to determine how good (or bad) everything is with health. For example – beetroot juice. It starts the processes of cleansing the body, and therefore it is not recommended to immediately use it in large quantities. To begin with, it will be enough to consume half a glass, or even less, and observe the reaction: if the sensations are too unpleasant, the dose should be reduced.

But the clearest sign of health problems is a change in the color of urine after drinking beetroot juice. If the color of urine has changed, then there are problems with the gastrointestinal tract and intestines, in particular. If, after drinking beet juice, the urine does not turn reddish, this indicates that the gastrointestinal tract is in a healthy state.

Beets: benefits for the body

So, if the result is disappointing, then you can again use beets to change the situation. Aristotle spoke about its beneficial properties. He claimed that it has unique healing properties. During the war, in the absence of antiseptics, grated or chopped beets were applied to purulent wounds to reduce inflammation. And sometimes it saved lives. In conditions when the number of wounded reached such volumes that some had to wait for several days in line for the operation, it was very important to prevent inflammation and suppuration of the wound. 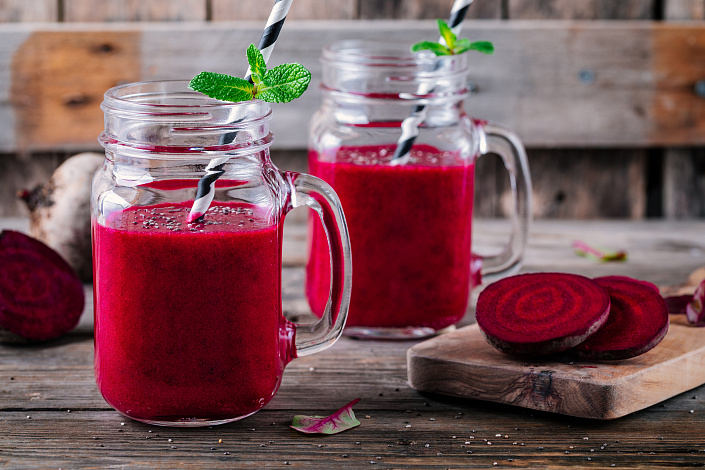 Also, beets are able to remove toxins and toxins . Modern nutrition, which often leads to the formation of mucus in the body, clogs the intestines. Animal products, baked goods in large quantities, potatoes, and so on, all lead to the formation of large amounts of mucus in the body. And according to one of the theories, it is the mucus that accumulates in the body and is the cause of almost all diseases. Well, at least, it, unambiguously, becomes the cause of colds – everyone can be convinced of this: all that mucus that comes out through the nose and lungs is accumulated precisely by improper diet.

And beets are great for bowel cleansing.from mucus. In naturopathy, it is believed that it is the polluted intestine that provokes many diseases, since, firstly, there is no possibility of full assimilation of food, and secondly, toxins and toxins from the intestines are absorbed into the blood and carried throughout the body.

The composition of beets includes almost the entire periodic table , but it is important to understand that in its original form, coarse fiber is not absorbed. If our goal is to assimilate the maximum amount of components from a given vegetable, then it is better to use this product in the form of juice. The most optimal would be a combination of the use of beets in their original form and in the form of juice. Beetroot in the form of coarse fiber will stimulate intestinal motility, and beet juice will suppress pathogenic microflora, and this will be a comprehensive cleansing and improvement of the intestines.

Many of the components in beets are helpful in treating diseases. So, magnesium, which is rich in beets, contributes to the treatment of atherosclerosis and hypertension. Also, beets have a diuretic and laxative effect, which also has a positive effect on the cleansing process. Beets can even help deal with depression and weakness. Beets are also involved in the processes of hematopoiesis, blood purification and the normalization of hemoglobin levels. In a word, an irreplaceable product .

Beets are rich in folic acid, which makes them an important food for pregnant women, as folic acid is very important for the formation of the fetus.

The presence of iodine in beets allows you to solve the problem with its deficiency, which is present in many today. Also, beets stimulate muscle growth, so drinking beet juice will be useful before and after exercise, but without fanaticism, since a large amount of it can have a laxative effect, and this can interfere with the training process. Beetroot has a powerful alkalizing effect on the body, which can be effective in the fight against cancer, because it is known that the alkaline environment is destructive for cancer cells.

Even Hippocrates knew about the healing properties of beets and included it in his healing recipes. Thus, ancient medicine was much closer to nature in the treatment of diseases and therefore, apparently, had greater success.

The main mistakes in the treatment of beets

For the beetroot treatment to be as effective as possible, common mistakes should be avoided. Perhaps the biggest mistake in this matter is cooking. Yes exactly. No wonder the ancient proverb says that God invented food, and the devil invented cooking .

The first mistake is overcooking the beets. To boil, fry and in any other way thermally treat beets means turning a storehouse of vitamins into a completely useless, dead product. Many healing properties disappear in this case.

The second mistake is an attempt to treat urolithiasis with beets. Such a mistake can not only deprive the process of treatment of benefits, but also make it dangerous. Oxalic acid, which is contained in beets, can provoke the process of movement of kidney stones, and this can end in an exciting trip to intensive care with all the ensuing consequences.

The third mistake is the use of beets for diabetes. It is a vegetable high in sugar and may have adverse effects on someone with diabetes.

Another mistake to avoid is to “advertise” the beetroot treatment to other people without first trying it out. Any knowledge should be transferred only after it has been verified through personal experience. There are many different methods of quick healing on the Internet, and if, after reading each such article, without any verification, tell others about it, then this can lead to very disastrous results.

Another mistake is fanaticism . People susceptible to this phenomenon, having learned about the benefits of beet juice, can start drinking it in liters, and, as you know, “too good is also not good.” 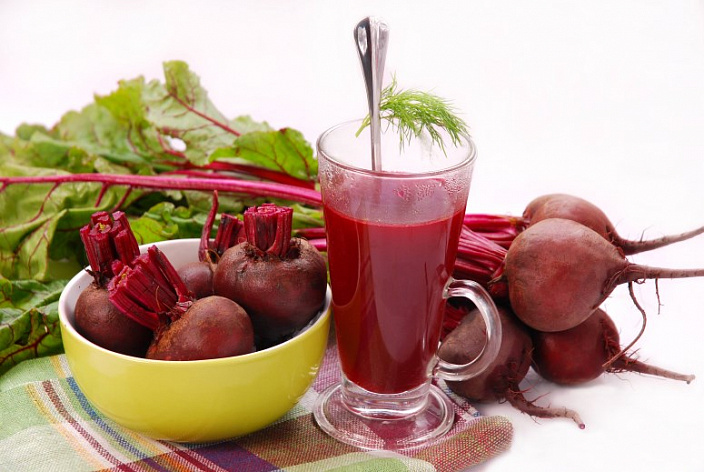 Now let’s look at the basic recommendations for eating beets. First, if you want to get a full set of vitamins and minerals that beets are rich in, you should remember that it is best absorbed in the form of juice. But since it also has cleansing properties, it is better to start taking beet juice with a volume of 100-200 ml, gradually increasing if the body does not respond to this procedure with violent cleansing processes.

If the goal is to cleanse the intestines and gastrointestinal tract, beets can be consumed as a salad, but there are two important points. First, it is better to cut it larger so that it can mechanically act on the intestinal walls, cleaning them. Second, only raw beets have cleansing properties; boiled or, even worse, fried – it loses its hardness, and with it its cleansing properties.

To enhance the cleansing effect, it is better to eat beets separately from other foods. However, you can mix it with other vegetables. Since vegetables are not digestible, mixing beets with, for example, cabbage or carrots will not harm the purification process in any way. As for the juice, it is better to drink it in its pure form, without mixing (or mixing with water), 30-40 minutes before taking the rest of the food. Drinking at least 200 ml of beet juice will saturate the body with vitamins.

Also, beetroot juice can heal a runny nose and sinusitis: it is enough to bury 5-10 drops of fresh beetroot juice in the nose to speed up the healing of these ailments. Too much juice should not be instilled if you are not ready for a powerful process of cleansing the nasopharynx. It’s effective, but not very pleasant in terms of feel.

For problems with the gastrointestinal tract

The coarse fiber of beets will be beneficial for constipation and digestive problems. It actively stimulates intestinal motility, which can solve many problems. Beetroot juice can help with skin problems: acne, rashes, insect bites. It is enough to apply beet juice on the problem skin surface and do not rinse for at least 30 minutes.

For the treatment of blood diseases

Beet juice is the best remedy for any blood disease. It is advisable to consume beet juice three times a day, 100-200 ml at a time. In this mode – to consume juice for a week, then a week of rest, and again a week of juice treatment. Any blood disorder is likely to improve significantly.

As mentioned above, beets can be dangerous in diabetes, but at the same time, they can also help in its treatment. The only question here is the dose and correct use. Therefore, it is better to consult a naturopathic doctor regarding this issue, who will be able to suggest the correct dosage and treatment features.

As we mentioned at the very beginning, colds are associated with the accumulation of mucus in the body and in particular in the intestines. A good dose of raw beets can quickly clear mucus from the intestines and thus ease the course of colds and speed up healing. You can also gargle with beetroot juice.

Enemas with beetroot juice can help combat pathogenic microflora. Enema is done in a ratio of 50 ml of juice per liter of water.

In general, beetroot and beetroot juice are excellent means for a comprehensive cleansing of the body and healing from many ailments. But, as always, one should warn against fanaticism. Too intensive treatment and cleansing, as a rule, ends in sad consequences. Therefore, we start with small doses and listen to the reaction of our body. And remember – our health is only in our hands. Nobody but us can make us healthy. Nobody except us.

We draw your attention to the fact that it is advisable to eliminate any problematic at three levels: physical, energetic and spiritual. The methods contained in the article are not a guarantee of recovery. The information provided should be considered as capable of helping, based on the experience of traditional and modern medicine, the multifaceted action of herbal remedies, but not as a guarantee.